I imagine that back in the days of gunslingers and gold miners the ales that quenched the thirst of the common man, the 'hoople' as David Milch so eloquently called him in the TV series Deadwood, was something akin to a French saison. Of course it wouldn't have been as clean as the modern day cultured yeasts allow for, but all would've had the same premise: hoppy, lots of fruity esters from a warm fermentation, and bone dry! I imagine that they were all different with every batch having its own special kind of strange.  The story of saison is of a drink developed to quench the thirst of the local farm hands in Wallonia, but I don't think this would have been common practice in Belgium alone. Saison's and ales like them, would be a global style for the hoople the world over. And Im sure as the mid days sun rolled over, the afternoons got a bit wilder as our hooples quenched their thirst tending less to the fields and more to the bottle, with greater and greater depravity and abandon.

I like the connotation of this style. Its a truly unique expression of the brewer and the indigenous ingredients available. Ive been incessantly brewing saisons for months trying to pin down the perfect balance.  Ive worked through three different strains of yeast and finally settled on a private collection strain from Wyeast called 3726-PC Farmhouse Ale. This strain was isolated from Braserie De Blaugies in Belgium and behaves like any other ale yeast with an average attenuation of about 75%. Rather than pushing the temperatures higher and higher to get the fruity flavours, you can use a fermentation temperature of 23C which brings out a mix of tropical esters and spicy phenols that just scream out for some New Zealand hops.

So I went overboard! Motueka and Kohatu late in the boil add a significant spicy zest to the beer and its the dry hop schedule that really tips this on its head and turns it into a more ‘farmhouse’ type of ale.  Combined with the yeast esters its a tropical fruit bowl dominated by pineapple and mango with an intriguing dry, spicy character layered underneath. Its so unique that I ended up brewing five more batches just to check it was not a fluke and to try a few different finishing gravities before settling on the right amount of body to balance the heavy load of hops.

You see most Saisons are very dry, some finishing as low as 1.000 SG. I'm looking to make an easy drinking ale thats sub 5% ABV and if the beer were to finish too dry it would lack a substantial malt character to keep it interesting. The hops would have to be toned down to balance this and I want more hops and more character without all the alcohol. So we're mashing high at 68C and using a yeast that leaves a little sweetness but still finishes dry and tart. To me this is the fundamental difference between a saison and a farmhouse ale (although many would argue they are one in the same).

The malt is all from Gladfield Malt in Canterbury. Pilsner makes up the majority of the grist and leaves a very floral honey character to the beer while some vienna and wheat give it that rustic complexity which typifies the style. This is a true New Zealand style farmhouse ale made with traditional yeast and fresh local malt and hops. 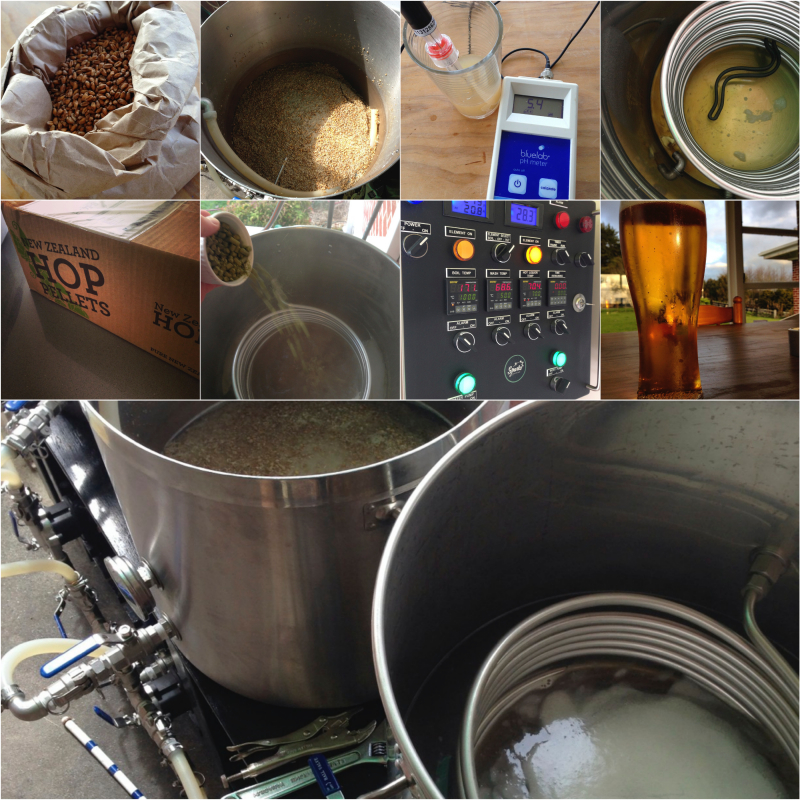 Yeast nutrients and Koppafloc at 10 minutes

Ferment with Wy3726-PC Farmhouse Ale at 23C for 4 days and raise it up to 25 for another 2 days. When terminal crash to 2C and rack to a keg before adding dry hops and force carbonating at 15PSI for 7 days.

The keg will taste good for a few weeks before it needs to be transferred off the hops and into another keg (If you can't keg then transfer to a secondary and dry hop for 4 days before bottling), until that time you can enjoy totally fresh hoppy beer with every pint so rip through it! After its transferred as the hops drop out the yeast esters remain and keep the beer interesting!

No one has commented on this page yet.